Woody Point is a coastal suburb of Redcliffe in the Moreton Bay Region, Queensland, Australia.[2] In the 2016 census, Woody Point had a population of 4,418 people.[1]

Along with its neighbouring coastal suburbs on the Redcliffe Peninsula, the suburb is a popular recreational destination within the Brisbane metropolitan area.[citation needed]

Woody Point is at the south-east of the Redcliffe Peninsula, approximately 35.2 kilometres (21.9 mi) by roadnorth-northeast of Brisbane, the state capital of Queensland, Australia.[citation needed]

The suburb is bounded by Moreton Bay to the east, Bramble Bay to the south, roughly by unnamed drain to the west and roughly by King Street to the north.[3] 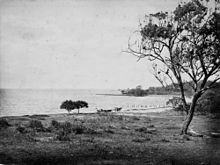 In 1799, Matthew Flinders landed on the peninsula and named the location Red Cliff Point after the colours in the cliffs. In 1823 the peninsula was selected as the site of Queensland's first (and only) penal colony (Moreton Bay penal settlement) but, after arriving in 1824 to establish the colony, problems with mosquitoes and the resistance from local Aboriginals caused the colony to relocate up the Brisbane River in 1825, founding the city of Brisbane.[citation needed]

Redcliffe developed as a small seaside retreat accessible only by boat from Brisbane while Woody Point was originally a banana plantation.[citation needed]

When the Hornibrook Bridge opened in 1935 (later replaced by the Houghton Highway and Ted Smout Memorial Bridge ), it linked Brighton, the most north-eastern suburb in the City of Brisbane, across Hays Inlet to Clontarf on the Redcliffe Peninsula. By improving the road connection between them, Redcliffe then became much more accessible and grew as part of Brisbane's suburban sprawl.[citation needed]

In 1958, HMQS Gayundah was run aground at Woody Point to create a breakwater.[9]

Woody Point's Apex Park & Bicentennial Park were constructed by reclaiming land along the foreshore in the 1970s.[citation needed]

Woody Point's current renovations include the construction of high-rise apartment buildings overlooking Bramble Bay, Moreton Bay, The Port of Brisbane and the Ted Smout Highway. Until recently, restaurants and cafes were very limited in the suburb, however currently Woody Point boasts some of the most highly rated and recognised restaurants on the Redcliffe Peninsula including The Belvedere Hotel, Maple Cafe and Butcher, Baker, Coffeemaker.[citation needed]

Other clubs on the point include the Redcliffe Outrigger Canoe Club and Humpybong Yacht Club.[citation needed]