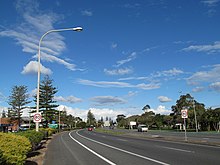 Tugun is situated at the junction of the Pacific and Gold Coast highways 7 kilometres (4.3 mi) north-west of Coolangatta and 97 kilometres (60 mi) south of Brisbane, the state capital.

Tugun is a holiday destination, with a number of holiday units and motels lining Tugun Beach. Tugun has a number of shops located on its Golden-Four Drive strip. The owner of the Jolly Swagman motel suggested the name "Golden Four Drive" for the section of the former Brisbane to Sydney Highway located closest to the beaches. A new highway was constructed further to the west and the local Council consulted with the community for suggestions about naming the bypassed section of the older highway. "Golden Four" was a local name that referred to the four southern golden beaches of Tugun Beach, Bilinga Beach, North Kirra Beach (in Bilinga), and Kirra Beach (in Kirra).[citation needed]

Homes in the sandhills of Tugun Beach, 1926

The name Tugun is believed to have derived from an Indigenous word of unknown dialect meaning "breaking waves".[9]

In 1959, St Monica's Catholic Church was opened, able to accommodate 150 people. In 1970, it was extended by half. In 1990, it was re-oriented and extended by half again. In 1996, St Monica's Samaritan Centre was established beside the church; it is used by Centacare to provided services for disabled people. [13]

All Saints' Anglican Church was dedicated on 1 November 1980 by Bishop Administror Ralph Wicks. It was conscrecrated on 11 November 1984 by Archbishop John Grindrod. Its closure on 22 September 1999 was approved by Assistant Bishop Ron Williams.[15]

The junction of the Pacific and Gold Coast highways was notoriously traffic-clogged but has improved markedly upon completion of the Tugun Bypass in June 2008.[citation needed]

There are a number of heritage sites in Tugun, including:

The Gold Coast City Council operated a fortnightly mobile library service which visited Station Street and Toolona Street,[21] but this was paused indefinitely due to the COVID-19 pandemic.[citation needed]

Other amenities in the suburb include the Tugun Tavern.[citation needed]

There are a number of parks in the area: