The channel was originally a joint venture between British broadcaster BSkyB (thus making it a spin-off of the British Sky News channel), Seven Media Group, and Nine Entertainment Co., as Australian News Channel Pty Ltd. The company was acquired by News Corp Australia in 2016;[5] with the subsequent sale of Murdoch's remaining shares in Sky UK to Comcast,[6] Sky News Australia has no relation to the British Sky News.

Especially since the acquisition of the channel by News Corp Australia, Sky News Australia has faced scrutiny from the press over its increased focus on opinion programming, with comparisons drawn to Rupert Murdoch's American news channel Fox News (which carries a similar format), and accusations that the channel's opinion programming has promoted right-wing misinformation and conspiracy theories,[7][8] and provided a platform for far-right figures.[9][10]

Sky News Channel's parent company, Australian News Channel (ANC), was owned equally by British Sky Broadcasting (now Sky Limited; which is now a division of Comcast), Seven Media Group and Nine Entertainment Co., each with a 33% stake in the company from its founding until December 2016, when it was acquired by News Corp Australia.[11]

In 2013, Sky News Australia was granted A$20 million in funding from its parent company to be used over three years.[16]

In mid-2019, the channel began expanding its digital operations.[17] This included a content partnership with YouTube, Microsoft News, Facebook and Taboola.[18] That led to new, opinion-focused videos being uploaded more frequently and across News Corp platforms, after having previously not uploaded any videos from February 2017 to April 2019.[17]

In February 2018, Sky News Australia launched a digital-first brand and content platform called 2600. The online political newsletter is sent out daily with breaking news from Canberra.[19]

Sky News programming consists of a mix of live news bulletins, live broadcasts from events (such as Parliament Question Time and selected press conferences), original commentary panel programs and simulcasts of international sister station Sky News UK. Sky News has broadcast every sitting of Question time from the House of Representatives since its launch in 1996.[20]

Sky News Australia increased its primetime programming offerings, particularly its political-themed shows, significantly in 2013, when it made more obvious its right-leaning ideology, ahead of the 2013 federal election, cancelling almost entirely the slot's rolling news block News Night.[16] It would then regain most of its runtime in 2014. Sky News Australia rebranded itself on 19 January 2015 as "Sky News Live", dropping the "Sky News National" branding.[21]

On weekdays, throughout most of the day, rolling news coverage is presented from one of Sky News Australia's studios. From 5 pm (AEST/AEDT), commentary programs begin, and continue through primetime until 11 pm AEST/AEDT. Most of these programs are presented by conservative commentators discussing the news of the day, often with a panel of other commentators, and feature a news update at the beginning of the program (and sometimes further updates during the program). Rolling news continues from 11 pm AEST/AEDT before coverage switches to an overnight simulcast of Sky News UK at 1 am AEST/AEDT.

In 2007, Sky News aired local breakaway programming for New Zealand viewers in primetime, filmed at Prime NZ's Auckland studios. One of these programs, Prime News – First at 5:30, was also simulcast to Australian viewers.[22] The debut of Sky News NZ Evening News was watched by just 1,500 viewers and panned by critics.[23] As of 2015, no local New Zealand programs are produced or broadcast following the loss of a production contract with Prime NZ.[24] However the channel debuted New Zealand Agenda on 16 June 2018, hosted by New Zealand bureau chief James O'Doherty from Wellington, New Zealand, focusing on NZ politics.[25] 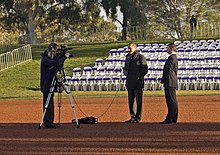 Kieran Gilbert, reporting from the Australian War Memorial in Canberra. 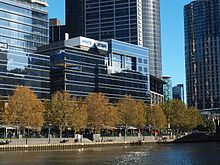 The Sky News Melbourne bureau is within the Foxtel headquarters in Southbank, Victoria.

Sky News Australia has a bureau in every capital city in Australia, completing this with the opening of its Hobart studio in 2013.[16] In 2016, it opened a bureau in Cairns, making it the first non-capital city bureau.[34] In 2017, a Gold Coast bureau was opened marking the third non-capital city studio after Cairns and Geelong.[35]

The base of Sky News Australia is in the Sydney suburb of Macquarie Park, from which the majority of its news and programming is broadcast. Its Melbourne studio was upgraded in 2014, allowing it to be used as a secondary broadcast studio.[36] Hinch Live became the first regular program to be broadcast from Melbourne.[37] Ahron Young is the Melbourne Bureau Chief.[38]

The third major bureau is in Parliament House, Canberra, opened in 2000.[20] Lyndal Curtis became Bureau Chief of in October 2015.[39] Additionally, Sky News has a small office in the Channel Seven building in Martin Place, which includes a small street-level single camera studio which looks onto Elizabeth Street, Sydney.[40]

Internationally, Sky News's only foreign bureau is in Wellington, New Zealand, opened in 2015.[41][42]

Largely, Sky News struggles to garner any significant viewership figures and is largely confined to a core group of around 50,000 nightly primetime viewers across their cable and free-to-air platforms. Thus, the channel rates extremely poorly compared to other news networks such as ABC News and broadcast networks.

The highest rating broadcast on Sky News Australia was an episode of Paul Murray Live on 26 June 2013 (following the 2013 Labor leadership spill), averaging 197,000 viewers across a special two-hour broadcast. The highest audience share Sky News Australia has achieved was during coverage of the 2009 Victorian bushfires.[45]

Sky News Live reached a total audience of 700,000 viewers on 14 September 2015 (including simulcast on Sky News Business) during the 2015 Liberal leadership spill. It was the most watched subscription television channel for the evening and outrated all free-to-air television channels between 11 pm and midnight AEST.[50] The highest rated hour of coverage was from 10pm, achieving 190,000 viewers, the second highest ratings since the 2013 Labor Party spill.[51][52]

A March 2016 article in The Guardian Australia reported Sky News averages 12,000 national viewers between 6 pm and midnight, with a peak of 18,000 between 8 pm and 10 pm, although the report did not specify what days or dates this average refers to.[53]

In July 2018, Sky News claimed to have achieved its highest ratings on record, with viewership up 9% overall and its weeknight primetime (6pm-11pm) viewership 25% higher on the same period last year, according to OzTAM figures.[55][56]

In August 2018, coverage of the Liberal Party of Australia leadership spill, 2018 saw Sky News gain its highest Tuesday primetime audience ever with a 4.2% audience share. Speers, Credlin and Jones & Co all had their highest-rated episodes on record.[57]

Sky News Australia is considered by commentators to have a conservative, right-wing bias, with frequent criticism of Australia’s main progressive political parties, Labor and the Greens.[2][3] Presenter Paul Murray has stated that admitted that “Sky News at night is a Liberal echo chamber”.[58] In 2017, Denis Muller, a senior research fellow at the University of Melbourne's Centre for Advancing Journalism, described the channel as having a "split personality," running straight news bulletins and reporting during the day with professional and independent journalists and presenters, while moving towards "right-leaning punditry" in prime time.[4] Drawing a strong comparison to Fox News, the network began moving towards panel-based programming from 2010, with most of its highest profile prime time commentators conservative.[59][60] Hosts Andrew Bolt and Paul Murray have been compared to Fox News presenters Bill O'Reilly and Sean Hannity respectively.[4] In February 2021 Muller, commenting on former Prime Minister Kevin Rudd's statement that Sky News was following a pattern laid down by Fox News, described the nighttime programming of Sky News as including "the unconstrained peddling of extreme right-wing propaganda, lies, disinformation, crude distortion of fact and baseless assertions."[7]

In August 2018, Sky News was heavily criticised for providing a platform to Blair Cottrell, leader of the far-right, Neo-Nazi organisation United Patriots Front in a one-on-one discussion about immigration on The Adam Giles Show. Sky News presenters, including Laura Jayes and David Speers, were among those critical (both on-air and off-air) of his appearance on the program due to the fact that he has expressed admiration for Adolf Hitler and claimed to have manipulated women "using violence and terror."[9][10] Sky News commentator and former Labor Party minister Craig Emerson resigned in protest after the interview was broadcast, stating that "My father fought Nazis in WWII and was interred in a German POW camp", and that the decision to give Cottrell a platform on Sky News was "another step in a journey to normalising racism & bigotry in our country".[61] Activist groups called on advertisers to pull advertising campaigns off Sky News in the wake of the channel's interview with Cottrell.[62]

As many of the channel's primetime contributors are conservatives - many with clear career links to the Liberal Party - the Australian Labor Party and its figureheads Victorian premier Daniel Andrews, Queensland premier Annastacia Palaszczuk and Western Australian premier Mark McGowan are frequently critiqued whilst the policies of the Liberal and National parties of Australia are often endorsed and promoted. During the COVID-19 pandemic beginning in the year 2020, some Sky News commentators referred to Victorian Premier Daniel Andrews as a 'Dictator'[63] and a 'Chairman',[64] drawing a comparison to socialist and communist regimes when criticising Andrews’ frequent use of pandemic lockdowns and public health orders.

In the aftermath of the Christchurch mosque shootings in March 2019, Sky News Australia was temporarily removed from Sky New Zealand's satellite platform, amid concerns over how the channel's coverage could potentially affect the investigation into the attack; Fox Sports News was added to the platform as a replacement.[66][67] Sky News Australia was restored to Sky New Zealand on 21 March, six days after the attack.[68]

On 13 December 2020, Rowan Dean promoted the Great Reset conspiracy theory on Sky News Australia, claiming that "This Great Reset is as serious and dangerous a threat to our prosperity – to your prosperity and your freedom – as we have faced in decades".[8]

Sky News Australia has been a frequent critic of US President Joe Biden ever since he took office on 20 January 2021. Some reporters such as Andrew Bolt and Alan Jones have frequently commented about Biden's mental health, claiming it was declining and that Biden is unfit to be the President.[69][70]

Sky News began broadcasting in widescreen, along with its sister channels on 17 May 2009. Sky News Australia only provides closed captioning between 4 pm and 5 pm (AEST/AEDT) each day.[80]

With the roll-out of Foxtel Digital, Sky News Australia launched the Sky News Active interactive news service based on the Sky News UK service with the same name. The service offered a choice of eight news screens, some with original content not seen on the main channel they vary depending on the days news or events and include the latest news, business, sport, showbiz and weather in text. Other features included interactive polling and the latest news headlines via text. On 15 November 2009 Sky News active re-launched with a new look as well as 5 additional local screens (Sydney, Melbourne, Brisbane, Perth, and Adelaide[81]

Sky News Now was a mobile service available on Vodafone, Telstra and 3. It offered a wide variety of news in both video and text.[82] As of 2015, the service was no longer available.

Sky News Alerts is a SMS and MMS breaking news service available on all mobile phones inside Australia.[83] Breaking news alerts are sent to a subscriber via SMS or MMS at a cost per message.[84]

In November 2014, Sky News Australia was contracted to provide Qantas with in-flight news bulletins replacing a longstanding contract with the Nine Network.[85]

Sky News Regional (formerly Sky News on WIN) is a free-to-air version of Sky News Australia, which was launched on 2 September 2018. The channel features Sky News Australia and Fox Sports News programming, as well as the original morning newscast Sky News Breakfast.[86][87] The channel was originally established as part of a partnership with WIN Television.[88][89] In 2021, WIN's contracts with both Network 10 and Sky News expired; with WIN returning to its previous Nine Network affiliation on 1 July 2021, and Sky News's contract expiring on 1 August 2021 (the allotments were, in turn, used for 9Life).[90] Sky News reached a new agreement with Southern Cross Austereo to distribute the channel, now known as Sky News Regional.[90][88]