Prospect is the seat of the City of Prospect and an inner northern suburb of greater Adelaide. It is located 5 km (3.1 mi) north of Adelaide's centre.

Surrounding suburbs include Kilburn, Fitzroy, Medindie and Devon Park. The suburb has boundaries of Main North Road to the East; Carter Street, Audley Avenue and Avenue Road to the South; The Gawler railway line to the west, and a line 400m north of Regency Road (Livingstone Avenue, Angwin Avenue and Henrietta Street) to the north.

Prospect comprises a large majority of the land area (about five-sevenths, or 71%) of the City of Prospect council area.

The early Prospect Village was a private subdivision of sections 373 and 349 of the Hundred of Yatala, which intersected at the village centre (now St Helens Park and St Cuthbert's Anglican Church).[2]

To the new settlers, the undeveloped locality presented a "beautiful prospect", being described as "well timbered, with waving gum and shady trees".[3] Thus the early township was dubbed Prospect Village by Colonel William Light shortly after the colonisation of South Australia in 1838. The City of Prospect was established in 1872, formalising the name for local government and, in 1944, the city council voted to formally adopt the same name for the suburb which was the council seat itself.[4]

The first Prospect Post Office opened around 1861 and closed around 1872. A Nailsworth office (open from 1861) was renamed Prospect in 1874 and has remained open since then. It was located at First avenue, Nailsworth, with two tall palm trees planted in front of the post office to enhance visibility from a distance.[5]

Several even older historic named subdivisions existed within the current suburb bounds around the turn of the twentieth century, according to an 1896 map of the Hundred of Yatala:[7] 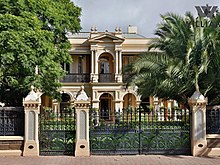 Audley House, a Victorian mansion at 32 Prospect Road on the southern border of Prospect, was built in 1885.[9]

Soldier's Memorial Gardens (34°53'7.75"S 138°35'56.91"E) is the largest park in Prospect. It has an open grass area and includes a playground, tennis courts and a performing stage for park events. Other features include sandpits, water features, a footbridge, a heritage shelter and the Prospect Community Garden.[11][12]

St Helens Park (34°53'33.35"S 138°35'43.33"E), located on Prospect Road, has a playground, public barbecues, rose gardens and climbing trees. It is also accessible from the rear of the park via Koonga Avenue. The City of Prospect's Spring Fair was formerly held here for almost four decades.[13]

Barker Garden (34°53'3.39"S 138°35'38.96"E) is located on the corner of Alpha Road and Prospect Road and features a memorial for Australia soldiers, rose gardens and garden arches in the centre. It is popular for wedding ceremonies and light displays during the Christmas period.[14]