Previous Next
Town in Queensland, Australia

Ingham is approximately 110 kilometres (68 mi) north of Townsville and 1,437 kilometres (893 mi) north of the state capital, Brisbane. The town is positioned about 17 km inland within the Herbert River floodplain where Palm Creek drains the low-lying lands. It is surrounded by sugar cane farms which are serviced by a number of private railways

George Elphinstone Dalrymple led the first British expedition to the area during his 1864 journey from Cardwell to the Valley of Lagoons Station. Dalrymple named the Herbert River on this expedition and described both the extensive grassy plains that flanked the river and the "tribe of wild blacks" who lived upon the them.[9] Co-owner of Valley of Lagoons, Walter Jervoise Scott, soon established the Herbert Vale cattle station on these plains which was managed by Henry Worsley Stone and Duncan McAuslan.[10] In 1868, the region was opened to further uptake of land by colonists,[11] with Daniel Cudmore and Maurice Geoffrey O'Connell being the most prominent selectors.[12]

This taking of land led to conflict between the British colonists and the resident Indigenous population of the region.[4] In the early 1870s, Native Police forces based at Waterview under the charge of Sub-Inspectors Thomas Coward and Ferdinand Macquarie Tompson, conducted missions to "disperse" groups of "very troublesome" Aboriginal people along the Herbert River.[13] Cattle continued to be speared and in 1872 a Native Police detachment captured a group of Aborigines at Daniel Cudmore's property. They were made to gather firewood and were then shot, their corpses being burnt on the gathered wood.[4] In 1873, the local Native Police barracks were moved to Fort Herbert (just west of the modern day town of Ingham) and placed under the command of Sub-Inspector Robert Arthur Johnstone.[4] Over the next seven years, Johnstone conducted numerous punitive expeditions, "dispersing mobs" of Aboriginal people around the Herbert River region.[14] James Cassady, a colonist who attempted to protect Aborigines in the region, described how Native Police officers during this period would order the shootings of peaceful Aboriginal people. In once instance, two young boys who survived these shootings were taken and given as presents to other colonists.[15] The Native Police forces in the Ingham region were disbanded in 1881.

The region was found to be ideal for the cultivation of sugarcane and Maurice Geoffrey O'Connell is regarded as the first to plant the crop in the Herbert River area.[4] He, however, soon committed suicide[16] and other entrepreneurs expanded the industry. In 1870, James MacKenzie established the Gairloch plantation, Farrand Haig and Henry Miles founded the Bemerside plantation, while Arthur Neame and Edwin Waller established the Macknade plantation.[17][18] The first local sugar mill was constructed in 1872 at the Gairloch property, with the Bemerside and Macknade mills opening the following year.[18] These operations came into financial difficulty and the Hamleigh Sugar Company with Alfred Cowley as manager became the dominant sugar enterprise in the region by 1883. However, with significant government assistance, the Colonial Sugar Refining Company (CSR) monopolised the Hebert valley sugar production by 1886, purchasing most of the plantations, buying the Macknade mill and establishing its own mill in 1883 at the Victoria Plantation.[4] The Macknade and Victoria mills are still in operation and are owned by Wilmar Sugar Australia.[19]

Most of the labour on these plantations during the early years was performed by imported South Sea Islanders who were required to work for three years earning only £6 per annum which was paid out at the end of the contract, often in cheap goods instead of money.[20] At CSR's Victoria Plantation, the Islanders wore a tin disc around theirs necks with a number stamped on it and although they were provided with a hospital, the amount of sickness and death among them was very high, the mortality rate in 1884 being up to 15%.[21] The hospital itself was a temporary structure in which the Islanders were locked in unattended at night. There is a recorded incident where a fight broke out, resulting in a death and mass injury.[22]

In 1885, a Royal Commission found that Islanders destined to work at Alfred Cowley's Hamleigh Plantation were blackbirded in that they were recruited in a way that was "cruelly deceptive and altogether illegal".[23] Likewise, the Commission found that many Islanders were deliberately kidnapped or murdered during a recruiting voyage for CSR's Victoria Plantation, describing it as a record of deceit, cruel treachery and inhuman slaughter.[24] In 1886, both the CSR and Hamleigh companies received government compensation for the removal and repatriation of some of the Islanders who had survived these recruiting events. This money was given despite an inquiry showing that the annual death rate of South Sea Islanders was as high as 17.5% at both these plantations.[25] The use of Islander labour continued on the Herbert River valley until the early 1900s. 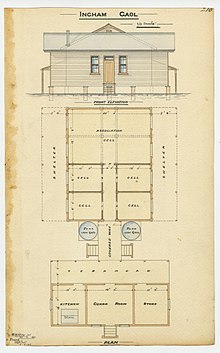 A cluster of a few huts known simply as Lower Herbert was established in 1871 which included a post office.[26] A township was gazetted on this site in 1879 and named Ingham,[27] after William Bairstow Ingham, a pioneer sugar planter on the Herbert River.[28][29]

A gaol opened in July 1886; previously there had only been a police lock-up.[33]

The town has a strong Italian and Spanish history with the 1920s and 1930s seeing a large influx of immigrants from these countries.[34][35] The Black Hand Gang, made up of some of these immigrants, terrorised the town in the 1930s with bribery and corruption, forming a dark chapter in the town's history.[36][37]

Following the devastation caused by Cyclone Yasi in Far North Queensland in February 2011, Ingham is one of a number of towns where a cyclone shelter was built. The Ingham cyclone shelter is capable of withstanding winds of more than 300 kilometres (190 mi) per hour, as experienced in a category five cyclone. The building serves as a multi-purpose sports facility for the Ingham State High School while in a cyclone it provides shelter for up to 800 people. The shelter was opened by Premier Campbell Newman in January 2013.[39]

In the 2016 census, the locality of Ingham had a population of 4,426 people. Aboriginal and Torres Strait Islander people made up 7.6% of the population. 81.2% of people were born in Australia. The next most common country of birth was Italy at 5.0%. 82.5% of people spoke only English at home. Other languages spoken at home included Italian at 7.2%. The most common responses for religion were Catholic 45.8%, Anglican 15.5%, No Religion 13.1%.[1]

Ingham has a number of heritage-listed sites, including:

Ingham is the service centre for many sugarcane plantations, which are serviced by the two sugar mills located in the Ingham district: Victoria Sugar Mill (located approximately 6 km from Ingham), which is the largest sugar mill in Australia and one of the largest in the southern hemisphere,[47] and Macknade Mill, which is the oldest operating sugar mill in Queensland. Both mills are owned and operated by Wilmar Sugar Australia Limited. The majority of the cane is transported to the mills by light tramlines.[48] Once processed by the mills, the raw sugar is then transported by tramline to the bulk sugar terminal at the nearby seaside port of Lucinda and loaded onto ships for export via the longest pier in the southern hemisphere (4.75 km long).[citation needed]

Other industries in the Ingham area include cattle, watermelons, rice, horticulture, fishing, timber and tourism.[citation needed]

The town is home to the regional art gallery called TYTO Regional Art Gallery which sits alongside the Tyto Wetlands and Enrico's Restaurant. In the same precinct is the Hinchinbrook Shire Library located at 73-75 McIllwraith Street.[55]

The Herbert River Express is a newspaper published in Ingham since 1904.[56][57]

Wallaman Falls are about 40 km to the west of the town. Hinchinbrook Island is about 20 km north of Ingham.

The Australian-Italian Festival is held in Ingham the first weekend in August each year and is one of the most popular events in the region, with thousands of people attending the event. The festival celebrates Ingham's cultural background, dating from the 1890s, when the first Italian immigrants came to the region. More than half the population of the town are of Italian descent.[58] The town is known as "Little Italy".[59]

The annual festival, held at Tyto Wetlands, began as an idea from a community workshop.[58] Many Italians visit from Italy to celebrate the event,[citation needed] reinforcing the cultural ties between the inhabitants of Ingham and Italy.

Notable individuals born in Ingham include: