Carnegie is a suburb in Melbourne, Victoria, Australia, 12 km south-east of Melbourne's Central Business District,[2] located within the City of Glen Eira local government area. Carnegie recorded a population of 17,909 at the 2021 census.[1]

Originally called Rosstown, after William Murray Ross, a prominent property developer and entrepreneur, a name change came about due to Ross' failed speculative developments.[3] In 1909 it was renamed Carnegie.[4][5] It has been suggested that this was done in an unsuccessful attempt to secure funds for a library from the philanthropist Andrew Carnegie but there is no contemporary evidence supporting this.[6][7]

In 1909, Carnegie was chosen as a new name for the area, in what was believed to be an ultimately unsuccessful attempt to secure funds for a library from the American industrialist and philanthropist Andrew Carnegie. 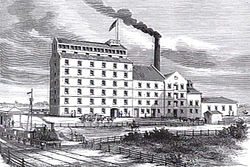 Artist's impression of the Rosstown sugar beet mill and railway, in 1876 and before construction had begun

In 1875 Ross began circulating a broadsheet proposal which detailed the Rosstown project, a large scale sugar beet processing mill, a railway line to serve it, and a residential estate, named after him on the edge of the metropolis between Melbourne and the town of Oakleigh. Although he began building the mill, it never began production, and the Rosstown Railway he constructed was never used.

However the estate sold well and gradually Rosstown had grown to a reasonable size aided by the opening of the railway to Melbourne in 1879.

Carnegie Post Office opened on 1 September 1911.[8] Carnegie was originally part of the City of Caulfield and by the 1920s it had a substantial commercial area.

The Carnegie Theatre was a popular cinema in the 1930s.

Carnegie Library and Community Centre sits between Koornang Road and Shepparson St, with a nearby Community space developed in 2021.

The northern part of Carnegie and the Koornang Road shopping strip is served by Carnegie station on the Cranbourne/Pakenham line. Carnegie is served by CDC Melbourne bus routes 623, 624, 626, 900 and NightBus 980. Tram route 67 terminates just south of the shopping centre and serves the southern part of Carnegie. The Public Transport Users Association has instigated calls for its extension to the nearby Carnegie station which services the shopping centre, as a major mode interchange [1].

There are two train services that pass through Carnegie railway station. As part of the government's Level Crossing Removal Project, Carnegie station closed in January 2017 and was demolished with a replacement opening in November 2017.

Carnegie has a diverse cultural cross-section, with many permanent settlers from across the globe, and transient international students studying at the nearby Monash University (Caulfield campus). 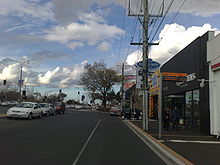 The southern view from Princes Entertainment Centre in Carnegie; the Rosstown Hotel front sign can be seen in the background

Dandenong road is increasingly becoming a focus of Carnegie's development. Originally the Rosstown Hotel was the focus of this part of the commercial strip, however today there are numerous showrooms and homemaker stores.

The main primary school is Carnegie Primary School (No. 2897), established in 1888 as Rosstown State School.[9]

The Velodrome, located at Packer Park, is one of the few of its kind in Victoria and is home to Carnegie Caulfield Cycling Club. Athletes used the velodrome as a cycling training venue during the 1956 Melbourne Olympic Games, while Australian athletes trained here for the 1960 and 1964 Olympic Games.

The 17 km-long Djerring Trail, which runs under the elevated rail pylons, was completed in 2018. The leafy, shared pedestrian/bike path has exercise stations, and links Carnegie to Murrumbeena (east) and Caulfield (west). Table tennis tables (bring your own bats and balls) and exercise equipment are adjacent to the trail opposite the train station on the west side of Koornang Road.

The Carnegie War Memorial[10] features a rose garden and cypress trees on Koornang Road, midway between Neerim Road and North Road. This is also the playground side of Koornang Park, which also provides grassed areas, walking trails, golf cages and cricket nets, and is home to Caulfield Football Club and Caulfield Junior Football Club. Carnegie Memorial Swimming Pool is a beloved outdoor 50s-style complex with grassed areas undergoing redevelopment.[11] The new complex will provide for indoor and outdoor aquatic sport and recreation.