Box Hill is a suburb of Melbourne, Victoria, Australia, 14 kilometres (8.7 mi) east of the city's Central Business District (CBD),[2] located within the City of Whitehorse local government area. Box Hill recorded a population of 14,353 at the 2021 census.[1]

Founded as a township in the 1850s, Box Hill grew over the following century into a small city with its own CBD, its own municipality in the former City of Box Hill, and its own suburbs, including Box Hill North and Box Hill South. In the 1950s, Box Hill was absorbed into Melbourne as part of the eastward expansion of the metropolis. Today, Box Hill is notable for its large Chinese community, and is home to the city's tallest high-rise buildings outside the CBD.

A major transportation hub for Melbourne's eastern suburbs, Box Hill is home to one of the city's busiest train stations, located beneath Box Hill Central. It is also served by the route 109 tram and numerous bus routes. 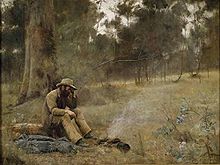 Frederick McCubbin's Down on His Luck, painted in Box Hill in 1889. He and other Australian impressionists founded the Box Hill artists' camp.

Box Hill was first settled by the squatter Arundel Wrighte, formerly of Van Diemen's Land, who, in 1838 took up a pastoral lease on the land he had previously explored in the Bushy Creek area. The first permanent settlers, Thomas Toogood and his wife Edith, purchased 5,000 acres (20 km2) in 1841 and Wrighte built a house on his property, "Marionvale", in 1844. The Pioneers' Memorial, which can be found in front of the town hall, is made from a chimney stone, taken from Wrighte's original house. It was not until after 1850, however, that Crown lands were subdivided and sold. Traffic along a main road running through the district encouraged the building of a hotel at Box Hill in 1853. Its owner named it the White Horse hotel and the name was bestowed on the road. Box Hill Post Office opened on 1 February 1861,[3] being the first official use of the name. The postmaster, Silas Padgham proposed the name, derived from Box Hill, Surrey, England, near his birthplace.[4]

In 1871, Box Hill township's population was 154 and the district relied on orchards, vineyards and mixed farming. The extension of the railway line from Camberwell to Lilydale in 1882 included a station at Box Hill, but there were also stations at Canterbury and Surrey Hills, to the west. They attracted subdivisions and development ahead of Box Hill. Growth came, though, with a school opening in Box Hill in 1887[citation needed] and the town became the seat of the Nunawading Shire Council, which met at the Box Hill Courthouse.

In the mid-1880s, Box Hill became a favoured area for landscape artists who wanted to paint the Australian bush en plein air.[citation needed] These artists, among them Arthur Streeton, Tom Roberts and Frederick McCubbin, established the Box Hill artists' camp, and formed what would become known as the Heidelberg School, the first distinctively Australian movement in Western art.

Unlike suburbs closer to Melbourne, Box Hill lacked the web of tramlines, which promoted residential development beyond the reach of the railway line. In 1916–17, tramlines reached the western edge of what in a short time would be the Box Hill Municipality, at Burwood, Mont Albert and Wattle Park. The years after World War I saw Box Hill's turn for residential growth. A girls' technical school was built in 1924 and a boys' high school in 1930. During World War II a boys' technical school was opened. 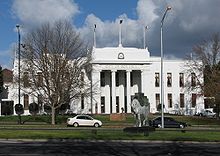 The new town hall on Whitehorse Road opened in April 1935.[5] One of the arguments for its construction was that "the boon it would prove to the local brickworks, which had just resumed production after a period of suspension".[5]

The Box Hill Presbyterian (now Uniting) Church building was originally the West Melbourne Presbyterian Church built 1867 on the corner of Lonsdale and William Streets; a final service was held on 3 February 1935, following which the building was dismantled and re-erected on its present site, being opened in late 1935.[5]

High-rise buildings with a tram in the foreground

Post-war housing expansion included a Housing Commission estate in Box Hill South. A district hospital opened in 1956.[6] The shopping area enjoyed growth and prosperity which, ironically, by the end of the 1950s was putting a strain on it; there was not enough space for parking. The development of Myer Eastland and Doncaster Shoppingtown in the late 1960s took trade away, and the shopping centre regained custom by undergrounding the railway line and station and building Box Hill Central on land, which included the old market.[citation needed]

In 1954, the Melbourne and Metropolitan Board of Works designated Box Hill as one of five district centres for metropolitan Melbourne.[citation needed] The plan has succeeded in Box Hill. In addition to the shopping centre, the Box Hill TAFE and several office buildings have strengthened its centrality in the region. Apart from commercial functions there are large reserves, with ovals in three directions, about a kilometre from Box Hill Central. Box Hill South lies between Canterbury Road and Burwood East, about two kilometres square. Its proximity to trams was better than Box Hill North's and its residential growth was substantially pre- and early post-war. The Box Hill Golf Club is nearby and a linear park continues along Gardiners Creek. There are church educational institutions; Kingswood College (Anglican and then Uniting) and the Christian Brothers' Teachers' College and St. Leo's College (1952 and 1957).

In 1971, a sister city relationship was forged with Matsudo, Chiba Prefecture, Japan. "Box Hill" is the name of a department store in Matsudo (ja:ボックスヒル).

Box Hill City was amalgamated with Nunawading City on 15 December 1994, to form Whitehorse City, renewing the boundaries that began with the Nunawading Parish and subsequent Shire.

More recently, Box Hill has experienced a construction boom, and is now home to high-rise buildings. These include the Australian Taxation Office's Box Hill Tower,[7] the Whitehorse Towers[8][9] and the 36-storey Sky One, which, at 122 metres, is the tallest building in Melbourne outside of the CBD.[10][11] More high-rises are under construction, including New Chinatown, a $450 million twin tower project which will serve as a modern "sibling" of the historic Chinatown in the CBD, with this development to consist of 10,000 square meters of mixed-purpose storefronts over three levels, a 4000-square-metre “Hawker Hall” where visitors will find street-style food stalls, a 1500-square-metre childcare centre, a Chinese language school and bookshop, Chinese herbalists, and a handful of Chinese and Western medicine clinics.[12][13][14][15]

Box Hill has a shopping precinct. These range from the shops along Station Street and Whitehorse Road, to the suburb's two shopping centres. Box Hill Central is integrated with a bus interchange and the Box Hill railway station.

The Box Hill Hawks are a local Australian rules football club, playing in the Victorian Football League and are based at the Box Hill City Oval. This team was formerly known as the Mustangs, named for the city's mascot, the White Horse. They are currently affiliated with the Hawthorn Hawks.

Another football team, The Whitehorse Pioneers, competes in the Eastern Football League.[18]

Box Hill Athletic Club, founded in 1932, survived through the war years and became powerful after the 1956 Olympic Games,[citation needed] held in Melbourne. The club's original training ground was at Surrey Park, Elgar Road South, an area provided by the Box Hill Council.

After several years of filling in and grading, the area known as Hagenauer's Park was made available for athletics.

In basketball, the Whitehorse Mustangs celebrated its 20th anniversary in 2009, having been formed when the North Box Hill and Surrey Hills clubs merged.[citation needed] The club fields junior teams each Saturday in the Eastern District Junior Basketball Association (EDJBA), with home games played at the basketball stadium of Box Hill High School. It also runs weekly social competitions for both men and women and fields a championship men's team in the Melbourne Metropolitan Basketball League (MMBL).

Aqualink Box Hill (formerly Whitehorse Aquatic and Leisure Centre), run by Whitehorse Council, provides residents with an indoor and outdoor pool, basketball courts, a gym, squash and tennis courts. The swim club, Surrey Park, swim at Aqualink Box Hill. The club uses the facilities of Aqualink. The surrounding parklands include (aside from a large lake, now filled with water, but once used as a quarry) a baseball diamond, a football oval and cricket pitches.

Box Hill is a major transport hub for the City of Whitehorse and surrounding suburbs. Box Hill railway station is located under Box Hill Central Shopping Centre and is served by the Belgrave and Lilydale railway lines. The complex also includes a large bus terminus, linking commuters to a broad range of destinations across most Melbourne suburbs.

Tram route 109, which runs along Whitehorse Road, was extended from Union Road, Surrey Hills, to Box Hill and opened in May 2003. It runs to Port Melbourne via the city.[20]

There are V/Line coaches that run from Melbourne (Southern Cross) to Mansfield / Mount Buller. The coach stop is opposite Box Hill Town Hall, on Whitehorse Road.

Box Hill has also been planned as one of the locations for an exchange station on the Southeastern section of the Suburban Rail Loop. It is planned to go through Station Street into Whitehorse Road next to the train station located in Box Hill Central. And start from early 2023 to late 2024.